This summary by my friend Tim Millard, Head of Advisory Group, Russia & CIS, Jones Lang Lasalles is a superb view of the current Russian macro and business environment. (Disclaimer – these are personal views, and may not necessarily be the same as the JLL house view)

As we gather pace into 2018 after the holiday period I thought that it would be useful to identify what I expect to be the key trends in 2018 – both for the Russian Economy as a whole and what that will mean for the property sectors.

I was fairly vocal about my expectations for an economic recovery to take hold in 2017 and for that to have fed through into the property markets during the second half of the year. Although there were clear positive macro trends, I was somewhat surprised that the recovery did not translate into similar improvements in Russian property. However, the fundamentals remain in place and I therefore believe that it is just a delay in the recovery and I expect to see a strong rebound across the board in 2018.

In no particular order of importance here is my thinking on some of the macro factors that will be in play this year:

There has been a sustained, consistent recovery in oil prices over the last 6 months. At the time of writing, Brent is close to $70 per barrel, with some commentators saying that $80 will be reached this year. Of course there remain a number of variables, and oil price forecasting does seem to be as much about voodoo as classic supply and demand analysis. However, reading the runes does suggest the oil price will remain strong throughout 2018. I expect the price to average above $70, and perhaps closer to $75. Of course, a strong oil price is a positive for the Russian economy, both directly and in terms of confidence.

There was a clear trend throughout 2017 of analysts upgrading their estimates for Russian GDP growth, both for 2017 and 2018. Despite some contrary arguments over the last week or so, I expect GDP growth to pick up through 2018 – due to a number of the reasons expanded in this blog. Increasing economic activity will feed through into the business sectors and is showing up in improving business confidence (see below). Although Goldman Sachs have recently upgraded their projections to 3.3% for 2018 and 2.9% for 2019 I may be a bit more conservative! I will go with 2.8% for 2018 and 2.6% for 2019 – you heard it here.

Gaining control of inflation has been one of the major success stories for the CBR with it falling to 2.5% towards the end of 2017. The 2018 target of 4% now seems very realistic. Again this will help confidence, particularly for consumers, as wage increases in real terms will be greater. The consumer does remain an important driver of economic activity in Russia and as wage growth feeds into increased consumer spending there will be improvements for property. Most directly of course retail and warehousing.

The ruble was very stable during the course of 2017, trading in a comparatively narrow band for much of the time, and strengthening over the course of the year. Although there was some decoupling of the exchange rate from the oil price towards the back end of 2017 (the subject of a very interesting note by our Chief Strategist, Vladimir Pantyushin – anyone interested please let me know) I do not expect this to be a long term effect. The oil price will remain a prime determining factor in the exchange rate, although there may be some policy reluctance to allowing the ruble to strengthen too much. Nevertheless, I expect more of the same, with the ruble being broadly stable and strengthening throughout 2018. Reading through from the oil price, and other factors outlined here, I expect the USD:RUB exchange rate to reach between 52 and 54 by the end of 2018. Weakness in the USD, however, may provide some upside risk to this prediction.

The low inflation environment and the stable exchange rate will allow further cuts in the Central Bank policy rate in 2018. The CBR governor is on the record as saying that the target for the policy rate is 200 bps above inflation. If it goes to the target of 4% this would imply a policy rate of 6% or 175 bps below the current level. I do not think that we will see cuts to this level in 2018, but believe that we will see further reductions of between 100 and 150 bps. Although there is no direct read through to property capitalization rates, or to investment activity in the property markets

there is an indirect link over time. The availability of cheaper debt and the erosion of returns in different asset classes will bid down cap rates in property investment classes over time.

There are a number of other wild cards that may have a one off effect in 2018:

This is something of an intangible, but the World Cup is likely to provide a bump to GDP growth and also to provide a lift to confidence levels. Properly handled it will also provide Russia with an opportunity to showcase itself to the world and to debunk a number of myths that are currently in circulation. Of course, there is also the potential for the opposite effect, and the Western media are often pre-disposed towards negative coverage of the country. The Sochi Olympics and the immediate aftermath demonstrated the potential for both big positives and massive negatives in how Russia is portrayed globally.

In March 2018, Russia will hold its presidential elections. Although this does not carry the whiff of the unexpected that is seen in many parts of the world, the process and how it is managed does have the potential to provide a positive boost to the economy or to lead to unrest, however unlikely that might seem. Difficult to quantify but one to watch.

At the time of writing the USA is considering its list for the extension of sanctions, which will be published shortly. We should also expect an ongoing stream of publicity and revelations about the extent of the links between the Trump administration and Russia. At best this will be a distraction. At worst there could be a significant knock on effect on Russia’s image which could affect FDI negatively.

So much for the macro factors at play. What does this mean for my predictions for the property sectors:

There was a marked surge in take-up in the final quarter of 2017 with a total of about 500k sq m having been transacted. As new supply remains constrained vacancy has fallen as a result to 13,8%. The pipeline for 2018 shows a modest increase, but there remains uncertainty about the actual level of deliveries. With both economic activity and confidence picking up as outlined above, I expect take-up to continue to accelerate, particularly with corporates looking to take advantage of historically low occupational costs. Vacancy will fall and I therefore expect rents to rebound, and probably much faster than anyone really expects. The rents that are currently available will not be around for long – get them while you can! 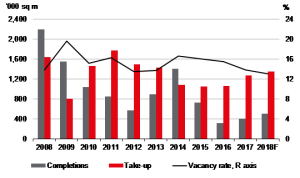 With the broader economic improvements, coupled with some likely giveaways around the elections, I expect to see strong growth in real wages and consumer spending in 2018. Retailers are nimble and will react quickly. Their ability to do so, though, will be constrained by a lack of available space – both existing and new. Vacancy is already low and declining (at 6,2% in Moscow) and the best performing shopping centres are already full and boasting waiting lists to boot. These will have the ability to upgrade their tenant mixes, and the pressure to expand chains will push up rents. Retail will probably rebound faster and higher in 2018 than the other sectors. 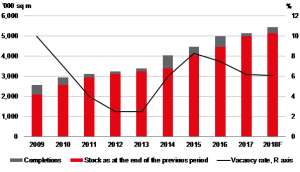 As goes retail, so goes warehouse. The rents in the warehouse sector declined severely during the crisis making it uneconomic to build new speculative space. Availability is already starting to get tight, particularly for larger requirements. It is clear from some regional markets that as the demand starts to run ahead of supply, or even the perception of limited space emerges, rental rates rebound quickly. Although I have been saying this for some time, rental growth in the sector is inevitable and I cannot see any factors that will hold this growth back in 2018.

So the story for the occupational markets is of increasing activity meeting constrained new supply – vacancy rates will fall and rents will start to increase, and that growth will accelerate throughout the year. For those who are likely to have extra requirements in the short to medium term, better to lock that space in now! 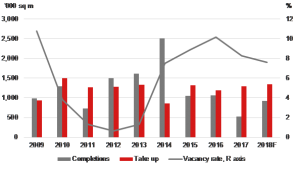 For the Capital Markets I see a very rare buying opportunity. There is value to be had everywhere and sellers are starting to become more active as they have more reinvestment opportunities available. Debt is getting cheaper and more widely available, and there is a strong income growth story to buy into. The policy rate will continue to fall, and as investors seek returns and move up the yield curve there will be increased interest in Russia – not only from traditional investors, but also from new sources of capital. As I said to an investor earlier this week – time to fill your boots!